B is for Billy Tea

Many cultures have their own unique and interesting tea ceremonies. Some may not consider Australian “Billy Tea” as a tea ceremony at first, however it has many of the elements of a ceremony and many Aussies are very proud of this tradition. Early Australian settlers brewed their tea in a Billy. They made it this way out of necessity.

Billy tea was developed by the early Australian settlers and is based in the Australian bush land out in the open. Many historians agree that the term “Billy” probably came from the corned beef, bouilli or “bully cans” that were recycled by the settlers and used as tea pots on open fires. The loose tea leaves were put directly into the metallic can together with a gum (eucalyptus) leaf for extra flavor.

is a metal can with a wire handle. This is filled with water and suspended over a fire. When the water boils, it is removed from the fire, and a handful of tea leaves are added. This is then left to brew for a few minutes. Then it is removed, and the boiling tea is swung around in a circle, 3 times, by the handle to use the centrifugal force to push the leaves down to the base of the can. This part requires some level of caution and skill. It requires a purposeful swing; any hesitant action would therefore result in a painful scalding.  Finally, the tea is poured into metal mugs, with milk and sugar added, although it’s unlikely the early settlers would have had access to either.

was always best accompanied by a fresh damper (Damper is traditional Australian soda bread). In colonial Australia, stock men developed the technique of making damper out of necessity.  Often away from home for weeks, with just a campfire to cook on and only sacks of flour as provisions, a basic bread evolved. It was originally made with flour and water and a good pinch of salt, kneaded, shaped into a ground ball, and baked in the ashes of the campfire or open fireplace. It was eaten with pieces of dried meat or spread with golden syrup (an extract from sugar cane that has a slight honey taste), but always with Billy tea or maybe a swig of rum. 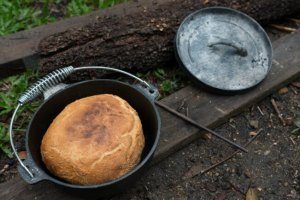