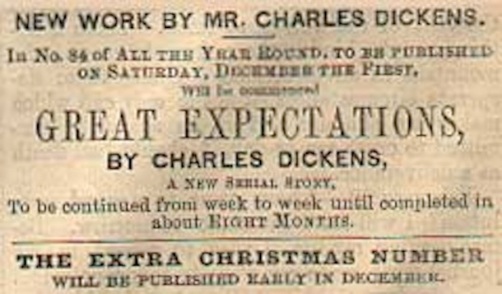 In Great Expectations (1861), for example, through the eyes of Pip we see… “After a little further conversation to the same effect, we returned into the Castle where we found Miss Skiffins preparing tea. The responsible duty of making the toast was delegated to the Aged, and that excellent old gentleman was so intent upon it that he seemed to me in some danger of melting his eyes…The Aged prepared such a haystack of buttered toast, that I could scarcely see him over it as it simmered on an iron stand hooked on to the top-bar; while Miss Skiffins brewed such a jorum of tea, that the pig in the back premises became strongly excited….We ate the whole of toast and drank tea in proportion, and it was delightful to see how warm and greasy we all got after it.”

Once Again in Great Expectations- Pip and Estelle…

“I rang for the tea, and the waiter, reappearing with his magic clue, brought in by degrees some fifty adjuncts to that refreshment but of tea not a glimpse. A tea board, cups and saucers, plates, knives and forks (including carvers), spoons (various), saltcellars, a meek little muffin confined with the utmost precaution under a strong iron cover, Moses in the bull rushes typified by a soft bit of butter in a quantity of parsley, a pale loaf with a powdered head, two proof impressions of the bars of the kitchen fire-place on triangular bits of bread, and ultimately a fat family urn: which the waiter staggered in with, expressing in his countenance burden and suffering. After a prolonged absence at this stage of the entertainment, he at length came back with a casket of precious appearance containing twigs. These I steeped in hot water, and so from the whole of these appliances extracted one cup of I don’t know what, for Estella.”

In Oliver Twist we meet Mrs. Corney, the matron of the work house, and see her preparing perhaps The perfect cup of tea, even with her silver spoon!

‘In fact, Mrs. Corney was about to solace herself with a cup of tea. As she glanced from the table to the fireplace, where the smallest of all possible kettles was singing a small song in a small voice, her inward satisfaction evidently increased—so much so, indeed, that Mrs. Corney smiled… Mrs. Corney shook her head mournfully, as if deploring he mental blindness of those paupers who did not know it; and thrusting a silver spoon (private property) into the inmost recesses of a two-ounce tin tea-caddy, proceeded to make the tea… “Drat the pot!” said the worthy matron, setting it down very hastily on the hob; “a little stupid thing, that only holds a couple of cups! What use is it of, to anybody! Except,” said Mrs. Corney, pausing, “except to a poor, desolate creature like me. Oh, dear!”

“The tea was made and handed in silence. Mr. Bumble, having spread a handkerchief over his knees to prevent the crumbs from sullying the splendour of his shorts, began to eat and drink; varying these amusements, occasionally, by fetching a deep sigh; which, however, had no injurious effect upon his appetite, but, on the contrary, rather seemed to facilitate his operations in the tea and toast department… The beadle drank his tea to the last drop; finished a piece of toast; whisked the crumbs off his knees; wiped his lips; and deliberately kissed the matron….”

I just love this part…

At one-point Mrs. Corney is called to the bedside of dying old Sally, who has something of great import to tell her and while she is gone… “Mr. Bumble’s conduct on being left to himself, was rather inexplicable. He opened the closet, counted the teaspoons, weighed the sugar-tongs, closely inspected a silver milk-pot to ascertain that it was of the genuine metal, and, having satisfied his curiosity on these points, put on his cocked hat corner-wise, and danced with much gravity four distinct times round the table.”

What did he leave us? Much more than tea references.  He is regarded by many as the greatest novelist of the Victorian era. An English writer, social critic and champion, who created some of the world’s best known and beloved fictional characters. By the end of his life he had edited a weekly journal for over 20 years, wrote 15 novels, five novellas, hundreds of short stories and non – fiction articles. He was an avid letter writer, and he campaigned actively for children’s rights, education and other social reforms.

I’ll leave you with this heartbreaking line, bravely spoken by the hungry orphan Oliver, “Please, sir, I want some more.” (Oliver Twist 1838) As for me – I always want some more tea – How about you?

Next… In My Cup Chun Mee Tea