Is often mistaken for a white tea because of its ghostly light green color and pure taste tea, but it is a green tea. It is often mislabeled as a white tea, because for a short period of time in the spring when the air is cool, the bushes’ leaves flush a pale light green – hence the mistaken identity. During this time, the leaves have a higher than normal amino acid content.  Higher amino acid contents mean that the infusion will be quite sweet and relaxing as the L-theanine content is elevated.  Widely regarded in China as one of the healthiest green tea to drink, it has been scientifically proven to contain 3-4 times more theanine. The name is due to the leaves appearing almost white before being picked.

And by the way…

The word ‘Anji’ stands for peace and lucky in Chinese.

There are more than 700 famous green teas in China – how many do you know?

You may have heard of the so-called Ten Famous Chinese Teas, but this list was drawn up in the 1950’s, it only highlights the superstars. Below the surface, there are hundreds of excellent green teas still in commercial production, waiting to be discovered by me and you! Of course, only the best of the best makes it to the Superstars. A superstar needs to stand the test of time. It is no wonder that all the Famous Ten are at least 100 years old.

Now you ask yourself this question: What happens if the list of Famous Ten is redrawn today? Would there be any changes?

The answer is a definitive yes. Almost certainly you would see Anji Bai Cha being included.

Is rare and is grown specifically and uniquely in Anji County, Zhejiang Province, at the foot of the Tianmu Mountains in southwest China. It is an old county with fresh air and crystal -clear rivers and has a history of 1,800 years – sounds magical doesn’t it!  Anji is synonymous with bamboo, containing over 60,000 hectares of bamboo groves. It has been designated a pilot county for ecological construction. Within its boundaries are mountains and gullies, lush with forests and vegetation- again magical!  Anji’s tea plantation has over 45,000 hectares and produces more than 3,300-tons of tea annually. Its particular tea cultivar was discovered in 1982, and is not as widely planted as other teas and has a short harvesting period. The plucking standard is exquisite (a perfect two leaves and a bud pick) with a perfect production of long, leafy, showy dry leaves. Again… magical and special! 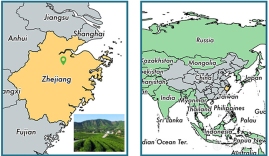 There was a legend…

Recorded in an ancient 900-year old Chinese book called “Da Guan Cha Lun” about a tea plant with jade white leaves.  The tea plant was noted by the most artistically endowed of Chinese emperor – Song Hui Zong (1101 to 1125 A.D.). He was a prominent tea connoisseur of his generation, and he noted a certain tea plant that was “extremely rare” and had “superior quality”.

It remained a legend until 1980’s, when a single tea bush (now known as the Ancestor of Bai Cha) was found in Anji County and experts believe that this was the tea plant that was mentioned in the book. It was soon cultivated for commercial purposes – and Anji Bai Cha is one of the teas processed from the leaves picked from these tea plants. The picking season is very short, around 30 days in early spring season and once the temperature increases, the leaves start to turn green. Anji Bai Cha harvest area is now a protected. Only the leaves picked within destinated area can be considered as Anji Bai Cha.

Are you ready for some technical stuff and a bit of chemistry?

Anji tea leaves are very temperature sensitive, so when picked in very early spring (at between high 60’s and just below the average 73°F days), they have less chlorophyll and are lighter green in color, while not absorbing as much sunlight. The leaves also have extraordinary (2-4 times) the normal amino acid levels than usual green tea, giving them the sweetest, most refreshing taste, with the L-Theanine amino acid providing a satisfying and calming effect to the body (some refer to as a tea drunk).  As the daily temperature warms a few weeks later, the leaves turn darker green as they again absorb sunlight, with the L-Theanine levels dropping back to normal. A recent study found that the tea is high in polysaccharides which can inhibit the hemolysis of blood cells- (technical right).   Research also found that the tea plant has low chlorophyll and polyphenols content (which explains the whitish-green tea leaves) but is very rich in amino acids. It has almost twice the amount comparing to other green teas. Amino acid helps suppress cortisol and reduces stress. And we all can use something so tasty that reduces stress!

Next… Anji Bai in my cup