A is for Alan’s Tearoom 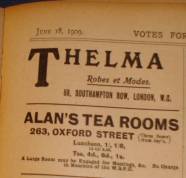 When you hear the words “tearoom,” it’s likely that you immediately think of a Victorian-inspired establishment best suited to special occasions, a place for women in pearls. But there was a much darker side of tearooms – These unobtrusive locations became a force exploited by well – organized militants. Who were these militants – the suffragettes.  They pushed aggressively to undermine the Constitution of the USA and the foundations of British and Canadian law.  One such place was Alan’s Tea Room, in London.

Alan’s was located on the first floor of No 263  Oxford Street, close by Jay’s fashion store. The red brick building, constructed circa 1864, had a semi-circular arcaded Venetian style window, an early-19th century-style fireplace, and contained arts and crafts furniture with slightly splayed legs and high stick-backs chairs with rush seats.

To organize a demo or prepare a window breaking protest…

Activists needed a safe place. tearoom subversion: The goal of the tearooms was to create an organizational base for mobilizing militants and supporting sympathizers. They provided a respectable cover for anti-establishment programs and recruitment. The single cause of all this can be summarized in one word: Women. This opening is phrased flippantly but entirely serious and accurate. The tearoom was core to the Women’s Rights movements of the 1860’s -1920’s, in the U.S. and British Empire. It formed the base for a political revolution of extraordinary honor, tenacity, and character.  Alan’s tea room was one of those.  It was owned by Marguerite Alan Liddle. She used her brother Alan as a front man and formal manger.  Marguerite was a sympathizer of the Suffragettes and her tea room became a favorite gathering for the activists.

The owner, ‘Mr. Alan Liddle’, while not charging the rent of the room for such meetings, doubtless made his profit from the sale of the accompanying tea and buns, conjuring up the image of a suave male entrepreneur cashing in on the need of campaigners for a safe haven in which to meet in Central London. But indeed…the  owner was not ‘Mr. Alan Liddle’, but ‘Miss Marguerite Alan Liddle’ (1873-1946), the daughter of a Shropshire solicitor. She does not seem to have taken a direct part in the suffrage movement, but certainly did lend her support. Research revealed that her sister, Helen Gordon Liddle, was an active member of the Women’s Social and Political Union.

Next… An Ji Bai Cha