Is a classic premium Chinese black tea similar to Keemun.  It is produced in Xiushui county, Jiangxi Province, China and it is commonly known as “The King of Teas” by Chinese tea experts. Xiushui is located in the north of Jiangxi which connects Hubei and Hunan Provinces. This county has been producing tea for 1,000 years.  Ning Hong production began in the mid – Qing Dynasty. According to tea expert Mr. Wu Juesheng, Ning Hong came into being 90 years earlier than Keemun black tea. Between 1892 and 1894 Ning Hong reached its peak in international markets, and at that time, its annual export was 7,500 tons.  Mr. Wu said when he visited London in 1934, he could find tea marked Ning Hong everywhere. 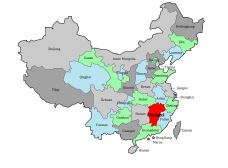 One of the lesser-known tea producing Chinese provinces, but very special in its own right.  One of the handcrafted artisanal teas for which they are credited in developing is Ning Hong.

Jiangxi is a landlocked province in southeastern China. From the 8th century onwards there is a long history of silver mining and tea production in the province. The province is bordered by a number of mountain ranges, and much of it is hilly, but the province has large, flat regions as well. Jiangxi’s climate varies with altitude, but it is generally subtropical and very humid, with strongly seasonal precipitation. Total yearly rainfall is very high, but winter months tend to be relatively drier, and late spring and summer months very wet. It is an area that is very conducive to the growth of tea and it creates the unique natural conditions for Ning Hong.
Jiangxi grows tea, like each of the six provinces that it borders, although it is significantly less well-known internationally than the bordering provinces like Anhui, Fujian, and Zhejiang. The Wuyuan area in the northeast of Jiangxi is important both in tea production and other forms of agriculture. The teas produced in Jiangxi include green teas, scented teas, and black teas in the style of Keemun; Keemun originated in neighboring regions of Anhui not far to the north.

Next… Ning Hong Jing Hao in my cup