M is for Meng Ding Huang Ya

In a poem Qin and Tea from Baijuyi, a famous poet in Tang Dynasty wrote: with respect to Qin music, the most famous one is Lushui, as for tea, Mengshan is an old friend.   Meng Ding Huang Ya (Yellow Bud) is from Mengshan (also called Mengding Mountain) of Mingshan County, Sichuan province

This rare Yellow tea comes from the misty peak of Mount Meng Ding, amid the “Heavenly Country”— the gorgeous Sichuan province, where tea cultivation dates to the Han Dynasty more than 2,000 years ago. “Meng Ding Tea and Yangtze Water” is exulted in the folk lore as the noblest of tea together with Yangtze as the best of water.  Meng Ding Mountain was the first place to cultivate the tea bush 1200 years ago at Gan Lu temple by the herbalist and Daoist Wu Li Zhen. It was an Imperial Tribute Tea during the Tang Dynasty and was recorded in many famous Chinese books. Only the leaves picked in the misty peak areas of Mount Meng Ding can be considered as true Meng Ding Huang Ya. 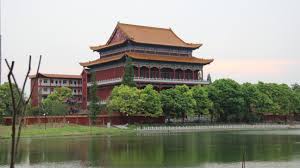 All year round, the weather there is misty, cloudy, and rainy, which is ideal for growing tea. Tea bushes don’t like direct sunlight, so the clouds and mist act as a natural filter to create shade for the tea bushes. Tea bushes grown in the shade will have a smoother flavor. As result of the high elevation, the temperature between morning and mid-day can frequently change, which is said to help develop the complex flavor of the tea growing here.

The climate also allows for an unusually long nine-month harvest season. Meng Ding tea is picked earlier than any other tea region. In early March (some years as early as February), pickers will go to the fields to pick evenly sized, plump, and healthy tea buds. 10,000 tea buds weigh about 500 grams, meaning it takes about 45,000-50,000 fresh tea buds to make 500 grams of dry leaves. Making yellow tea requires extensive skills and is labor intensive, so production is limited to the remaining few tea masters. It is a truly precious tea, not even commonly found in the local region.

While yellow tea is typically very rich in antioxidants and valued for its singular flavor, only a few types of yellow tea exist due to the complicated and tedious process in making it. In fact, there are only a few masters who know how to make yellow tea. After the complex processing, this lightly oxidized tea has a mild flavor without the grassy smell associated with green tea.

The fresh tea buds are carried back to the factory and placed on bamboo trays for about three hours to naturally remove some of their water content. 500 grams of fresh tea buds will then be fried at a time in a ½ meter diameter iron wok, which is small compared to those used in tea production else ware. The wok is hot, but scalding. The tea master then will push, squeeze and work the tea buds to maintain their shape. This process continues to move out more moisture from the tea buds. After about 20 minutes of frying, tea leaves are wrapped in a thick yellow paper for about 5 hours.  This wrapping of the tea is known as “men huan” or smothering. Between that time, they will open the leaves back up to mix them lightly to distribute heat, making sure the leaves receive even oxidation. After 5 hours, tea makers will refry the tea again, making sure half of the moisture is gone. The tea is wrapped again in the thick yellow paper for another hour or two. They will open the packets of leaves and fry again until only 30% of the moisture remains. They will spread a five-centimeter-thick layer of tea buds on top of more thick yellow paper to breathe for about thirty-six hours. After that, they will gently roast the leaves until they retain only about five percent moisture. During the slow processing, the color of the buds will turn from green to yellow.

The slow preparation and complex process helps develop a unique fragrance and a natural floral aroma. It is ideal for tea drinkers who like green tea for its nutrition and light flavor but want to avoid stomach upset that can occur after drinking green tea.

Next… Meng Ding Huang Ya in my cup