L is for Lu Yu 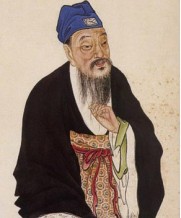 When speaking of tea, Lu Yu is an important person to give thanks to. For his achievements, he has for centuries been recognized in Chinese history.  Many feel that he was the most prominent and influential person in tea history. Lu Yu devoted his lifetime to research and the study of tea. He is credited as being the foremost important person in the developing, promoting of tea culture and tea industries. Today Lu Yu is often known as the patron Saint of Tea and the founder of tea art. He is also referred to as the Sage of Tea by many scholars and even worshipped by many in the tea industry as the deity of tea or “The God of Tea.”

Lived during China’s Tang Dynasty. According to the records, Yu was abandoned at the age of 3 at a temple by a lake and was adopted by the famed Tang Dynasty Buddhist Zen Master Zhiji of Longgai Monastery. The abbot was a famous Tang monk who excelled in the culture of tea. He taught Lu Yu how to grow tea, pick tea, and make tea. So, from his childhood on Lu Yu, developed a strong interest and passion in the art of tea. Lu Yu learned a lot from the monk, including Chinese characters, literature, and Buddhist scriptures. Despite being raised in the temple, Lu Yu did not become a monk. Instead, he became an educated and knowledgeable literary scholar. Nevertheless, he did not pursue material gains and was indifferent to fame.

The Masterpiece Cha Jing or the Classic of Tea…

For Lu Yu, tea symbolized the harmony and mysterious unity of the universe. He spent his life on the art of tea and made a great contribution to the development of tea. His book, known as Cha Jing in Chinese and The Classic of Tea in English, became the very first monograph on tea in the world. In the book, Lu Yu tried to comprehensively present all known information about Chinese tea culture. The book contained 10 chapters:

The Cha Jing was the first major unified compilation on tea information ever attempted by any writer in History.  During the Tang Dynasty the Cha Jing was considered the ultimate compilation of scientific and historical facts on tea, methods and practices, and a record of past achievements on tea.  In addition, it was also the fruit of Lu Yu’s 26 years of painstaking labor of love from research and expeditions, innovations and hands on work and studies.  The release of the Cha Jing provided answers and solutions to many long overdue questions and a new source of information for the tea industries in China at the time and even for years to come. It is interesting to note that even after over 1,200 years of change and innovations that the Cha Jing is still a must read for people in the tea industry in China.  This is because the Chinese believe that time and methods might change but true facts and principles are eternal, and it is always wise to learn from the forefathers.

Almost all of Lu Yu’s writings were lost. Out of all the countless books that he had written there were total of eleven about tea and water.  All of these were lost except for the Cha Jing.  There was too much attention and emphasis placed on the Ch Jing and as a result all his other books were neglected and were eventually lost over the years.

In his own words…

“There is more to tea than the mental and physical refreshment it confers.  Tea is also a sort of spiritual refreshment, an elixir of clarity and wakeful tranquility.  Respectfully preparing tea and partaking of it mindfully creates heart- to- heart conviviality, a way to go beyond this world and enter a realm apart. No, pleasure is simpler, no luxury cheaper, no consciousness altering agent more benign. Taking tea somehow evolves into a ritual reenactment of communion, a spiritual practice in other words, and by gradual degrees this becomes the Way of Tea.”